Kathmandu Valley – Not To Be Missed City Sights

Similarities and Differences of Safari holidays in Chitwan and Bardia

Top Five Monasteries in and around Kathmandu

Five reasons why you should visit Bardia National Park

Nepal as a spiritual holiday destination

The Himalayan nation of Nepal is a one-stop spiritual holiday destination. Every activity here is centered around finding yourself, seeking your roots, whether it be performing yoga or going on a trek or just visiting a nearby temple. All around the country, the air is scented with incense, daily offerings are placed in shop fronts and street shrines, and the cities and town seem to beat in time with the chanted mantra that filter down each street.

Although 81% of Nepal is actually Hindu, all religions coexist here in a coherent balance. This, however, shouldn’t have come as a surprise given that Buddha was born here (in Lumbini, 175 kilometers from Kathmandu). In fact, Hinduism incorporates several of Buddha’s teachings and even consider him to be an incarnation of Lord Vishnu.

Boudha Nath is a vast 14th century spherical stupa that also proudly holds the title of largest in Nepal, and the holiest Tibetan Buddhist site outside Tibet. Festooned with colorful prayer flags, the whitewashed dome and all-seeing eye of Buddha is already magnificent when viewed at ground level – until you discover the view from above. The complex transforms into majestic shape of mandala and pays homage to Buddha’s path to enlightenment.

You can witness pilgrims of all different ethnicities and religious circumvent the stupa, spinning 108 prayer wheels as they chant, and light butter candles in offering to Buddha. Nowhere will you see a more obvious picture of religious and cultural tolerance.

While the city of Kathmandu is perpetually abuzz with the overwhelming chaos and bustle of everyday life, the sacred site of Pashupati Nath is a sobering reminder that all lives come to an end. Honouring Shiva, the Hindu god of destruction, the site is so sacred that non-Hindus are not even allowed in main plaza. It’s here, on the banks of holy Bagmati, that devotees are cremated in open air ghats.

As the souls of the deceased begin on its journey to the afterlife and reincarnation, their bodies transform to dust and are finally swept into waters of holy water. Life and death exist hand in hand in Nepal, and nowhere is it more apparent than at Pashupati Nath temple.

If Kathmandu is the beating heart of the country’s spirituality, its innumerable hiking trails are the veins and arteries extending this bloodline to every nook and cranny of the country. From picturesque Hindu villages of the foothills to the Tibetan Buddhist culture halfway up in Manang, every day on the trial reveals Nepal’s spiritual side.

The trails are lined with fluttering color flags and chortens; and the sound of ‘Namaste’ is constant. Each day trekkers are welcomed into communities by warm smiles, offered tea and fireplace to stretch tired bodies again, and given best wishes for the following day.

Kathmandu, Bhaktapur, and Patan; Nepal’s three Durbar Squares are so much more than just former royal palaces – they are also home to some of Nepal’s most beautiful and prominent temples in Nepal.  Although much of the Durbar Squares were left in the ruins by 2015 earthquake, the standing temples and statues reflect the resilience of Nepalese people. They serve as poignant reminder that Nepal’s deep spirituality has remained resilient and stronger than ever.

Lastly, whether you are a spiritual guru, a self-help enthusiast, or even an atheist, there’s something about Nepal that will definitely change you. 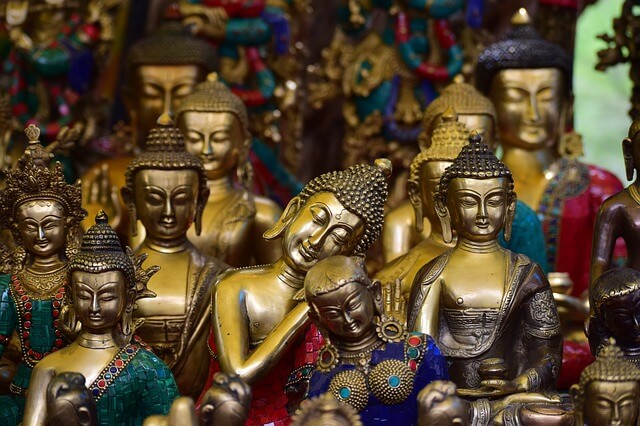